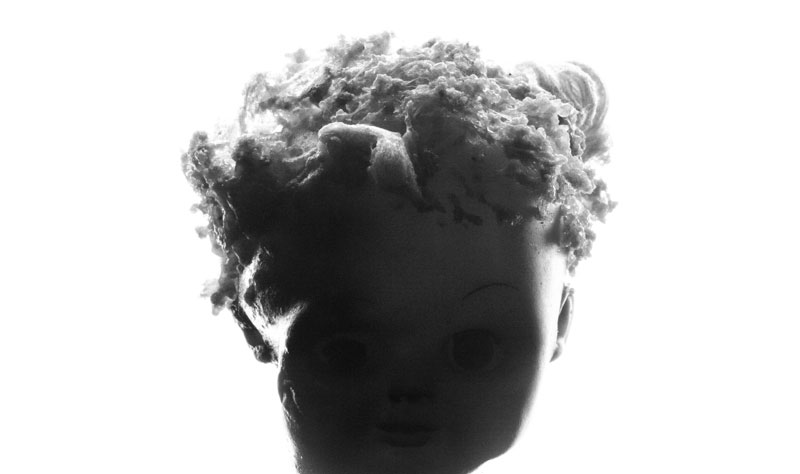 About 4 years ago in 2010, I came across a box of brand new, identical, individually wrapped, cheap plastic dolls at a thrift store. I had no idea what I was going to do with them at the time, but I saw potential and also a cure for boredom during harsh chicago winters when you don’t want to go outside, and most of my projects get done to cure my cabin fever. There were 23 of them and they wanted $4 a doll. I got them to cut me a deal for the whole box for $40.

For three years, they sat in the box. I would look at them, almost every other weekend, wondering what the hell I was going to do with them. The problem that I first encountered with them after the purchase was their hair. It was this dry, straw-y, weird plastic stuff, that I think just started to become brittle and disgusting, and if it got on your skin, it itched like horrible fiberglass. So I soaked these heads in water for three months, hoping the hair would fall off and settle in the bottom of the water container, but it didn’t. I knew I had to get rid of the rest of this toxic substance that sat atop of these little dolls heads. Oh yeah, at this point I just took all the doll heads off, and had a tub of water with a boatload of dollheads floating in it.

When I removed the heads from the tub, there was still a lot of hair on these things, and I knew that I had to get rid of it. So the only logical thing for me to do, was to take a torch to them. I mounted one onto a tri-pod, and took the heat gun to them, causing this plastic hair to melt together, and then eventually away, and I just started to have fun with it. I did this to all of the heads, and taking photos of each one and that is what you see here, a collection of doll heads, that have had the heat gun taken to them.