[Ed. Note: Ghost, formerly known as Ghost B.C. came across the pond for a stateside tour with Iron Maiden. This is my story about the spectacle leading up to Ghost at Oracle Arena and what happened after.] 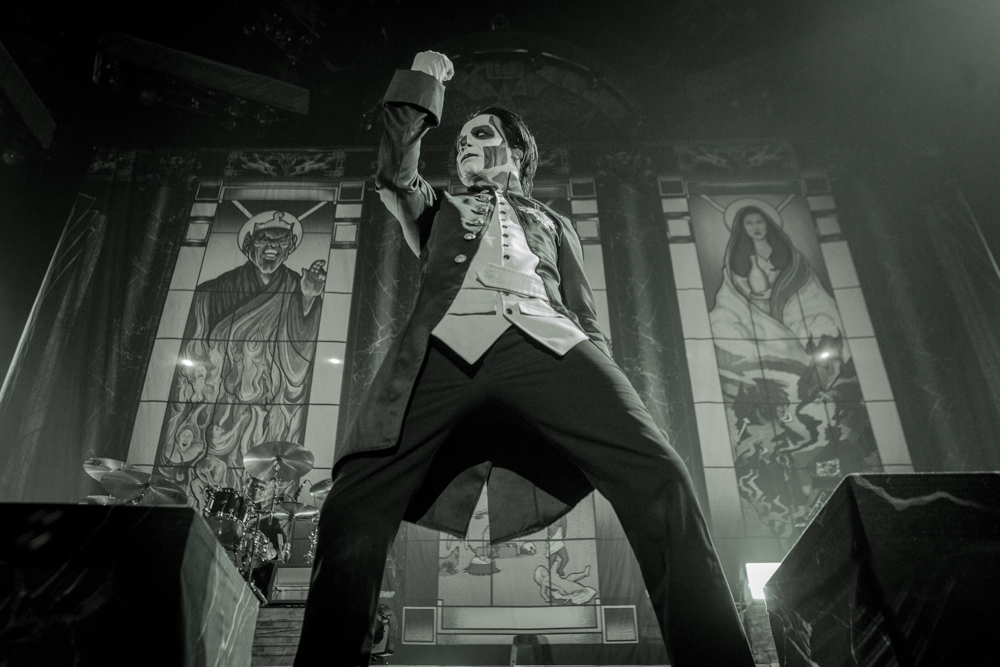 I walk through my apartment lobby and can smell the vinegar and soy sauce wafting from my apartment through the hallways. Looks like my mother and sister beat me home and are already cooking up a storm in the kitchen. Rad.

I enter the apartment and three small kids scream, “UNCLE CRAZY!” in unison and run at me to hug me. Not the typical scene around here, but I’ll take it. I’m so ready for family time for the next four hours. 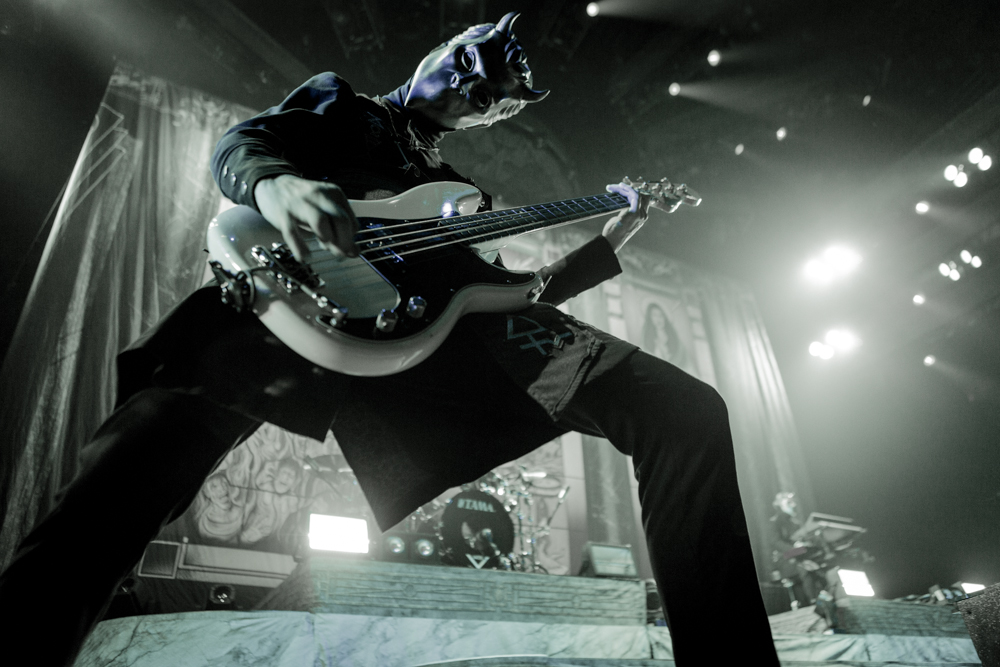 I hear it but don’t know where it’s coming from. What the fuck was that and where did it come from?

I ask the kids what they did with their day while I was at work. I ask my mom if I can help her. I find my sister already on top of things. I’m good. 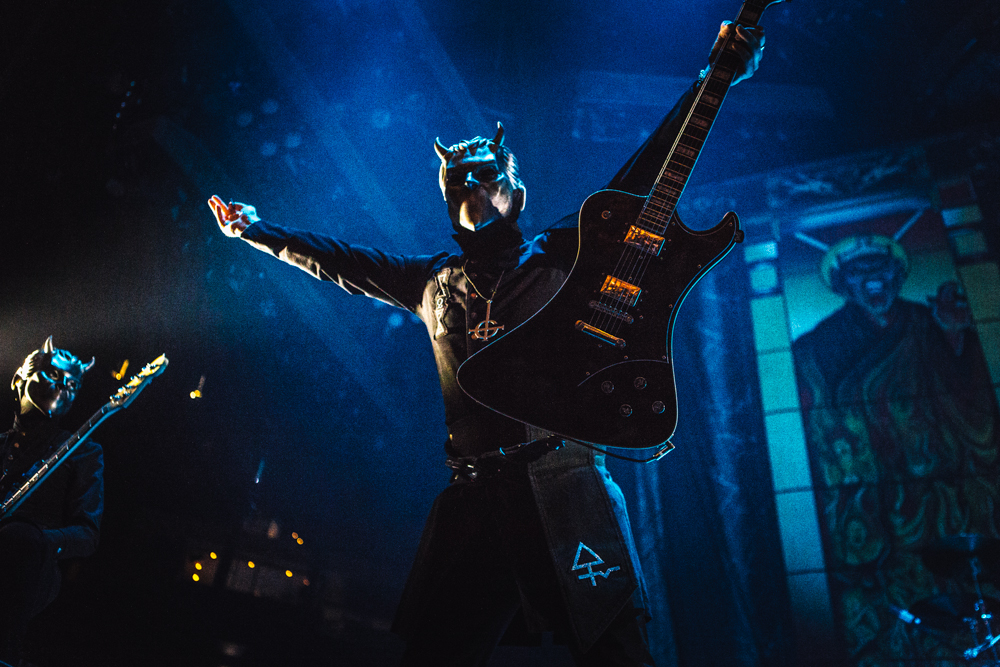 There it is again, only this time I’m in a direct line of site into my bedroom. My eyes fixate on my computer. The kids start asking me stereotypical kid questions like, “What do you do at work all day Uncle Crazy?” My mind goes on auto-pilot as I start to explain what it means to be an art director, all the while looking at my laptop. I tell the kids to hang on as I start walking to the closed laptop. 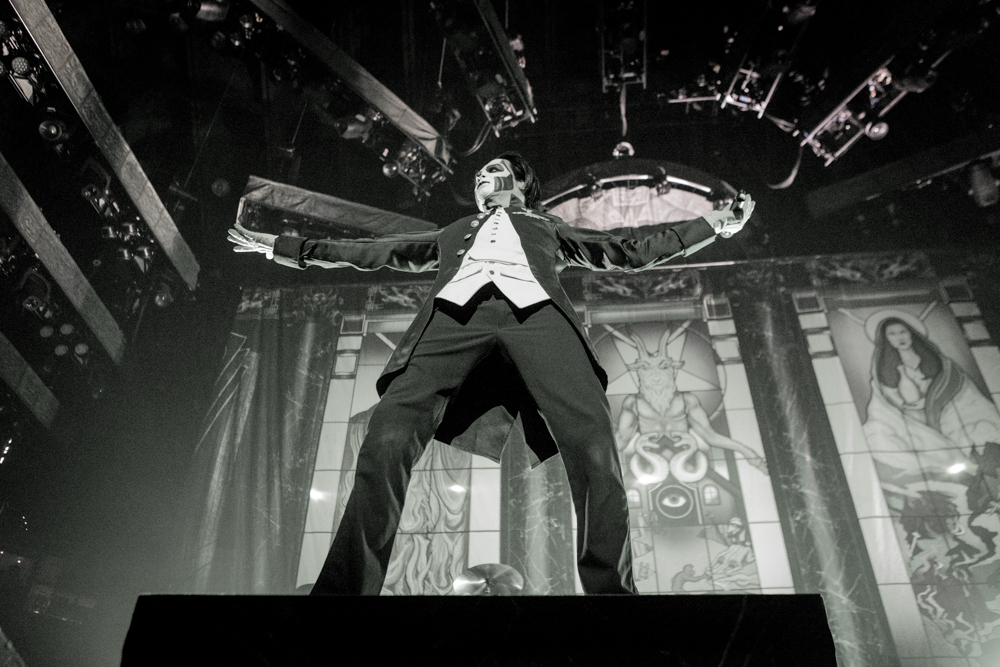 I open up the laptop.

I immediately go to my mail. There it is. Fuck. A message from the Clergy. Subject: RE: Ghost – Oracle Center – July 5, 2017. I’ve been expecting this e-mail for quite some time. Problem was, I received this at 8am and neglected to check my email all day. I look at my watch. 7pm. Look at the kids. Look at the email. Click it open. I hope it’s not too late.

The message from the clergy states that I have been offered a chance to partake in a holy communion conducted by Papa Emeritus III and the nameless ghouls as they pass through Oakland with the Iron Maiden Tour. The email states they will take the stage at 7:45. I look at the clock again. 7pm. I look up directions by car to the arena. I’m sure this can’t be good. 25 minutes. I tell my mom and sister about this situation. They say I should go, and I can take the mini-van they rented. I mention where it’s at. My sister tells the kids it’s where the Golden State Warriors play. They cheer. They want to see where the NBA champions play. Awesome. Get your goddamn shoes on kids, we’re going to Oakland. 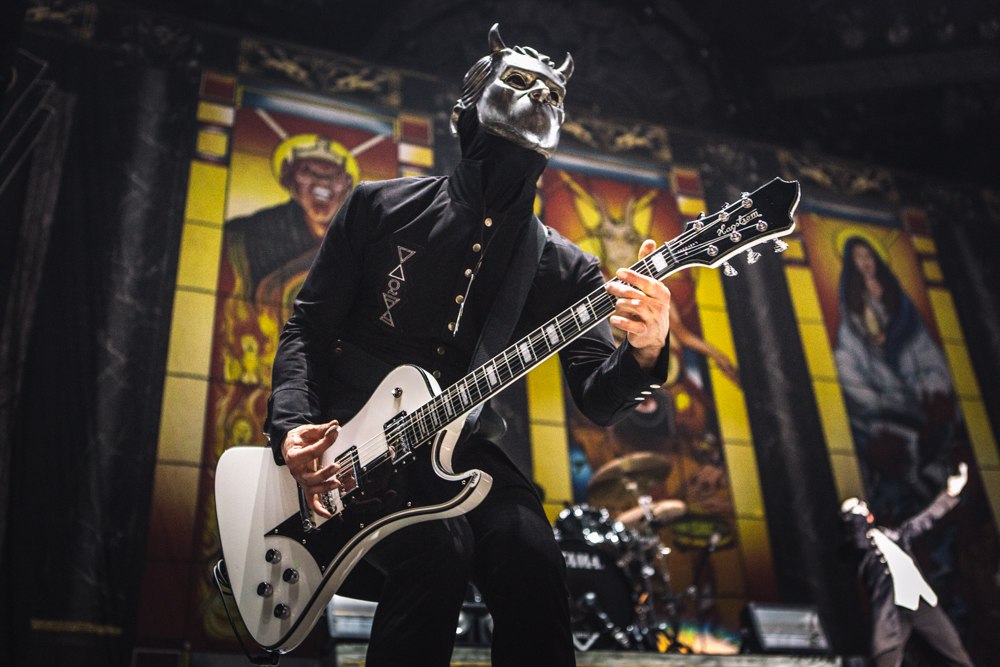 Fast forward through a lot of aggravation, gum chewing and swearing in front of the arena and my explanation that I have a photo pass. They let me leave the car where it’s at with the screaming children and my sister in it so they can get a good view of the arena. (For the record, it’s a shitty view because the parking lot is the size of three football fields.) I trek through the lot not knowing where the hell I’m going and interrupting so many tailgate parties of old biker dudes choking on joints and drinking tall boys. These are obviously the hardcore Iron Maiden fans. It’s like a fantasy voyage passing through the parking lot. This is Middle Earth and I’m a character who needs to pass through the many lands and tribes to make it to the land of death to capture the experience of Ghost and somehow make it back to my vessel safely.

But once I got inside this massive arena I found myself going to every wrong door. It was as if they had set up a series of trials that I had to complete before finally making it to my destination. I finally stumbled upon the entrance to where the press box office was set up. At this point I’m out of breath from all the running door-to-door and I can hear the band Ghost, the band I’m supposed to be shooting, performing all of the songs I love in what seems like a far off land. Did I mention that I am a huge fan of Ghost? 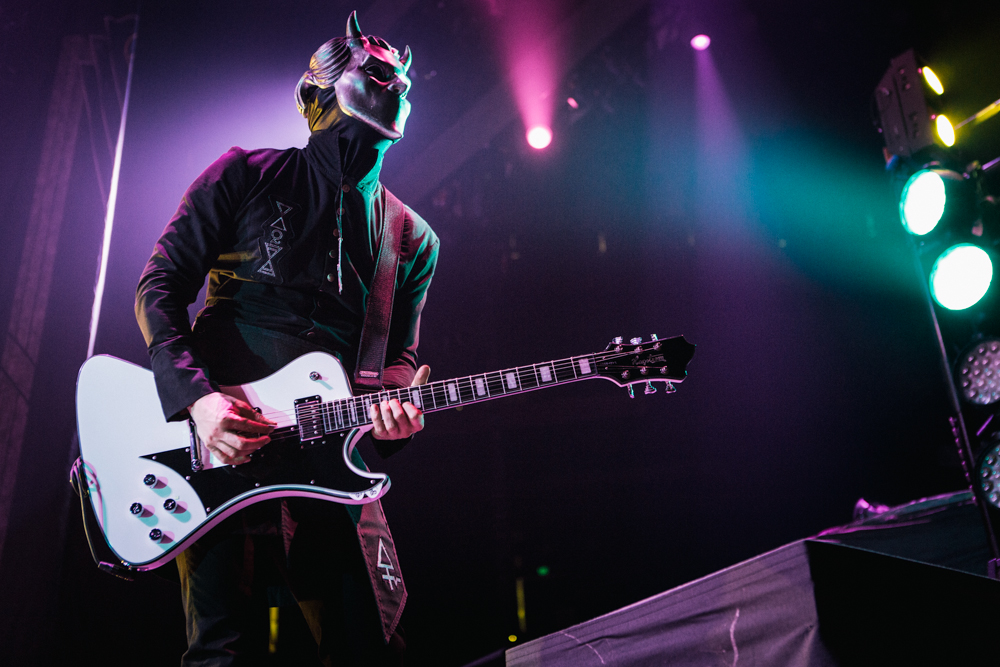 After I get my credentials and enter the arena, I once again get passed from wrong check point to wrong check point as I’m thinking, “FUCKKKKKK I”M MISSING THE FIRST THREE SONGS!” (Traditionally, photographers only get to photograph the first three songs.) After literally running back and forth across the arena and being tossed around like a pinball, I find myself at the front of the stage. I get escorted into the photo pit while Ghost is still playing, but ask no questions about where they are in their set.

Somehow I ended up shooting the whole remainder of the set without any problems. It was a range of probably about eight tracks or so from all their albums and banter in between songs mostly about women’s orgasms and what not from from the always funny, not-funny, Papa Emeritus III. Oh yeah, and he was excited to be in San Francisco. We’re in Oakland, but I ain’t mad at him… it’s just that I’m pretty sure everyone there was from the surrounding bay areas other than SF.

The band wasn’t touring to promote any new material, but they’re a good fit with and solid support for Iron Maiden on their North American Tour. Their Oakland stop was towards the tail end, but showed no signs of slowing down. The crowd was definitely there for Eddie [as in Eddie the Head] and the Boys but they’re still loving the absolute spectacle of what the band Ghost brings to the stage.

If I were to describe who and what Ghost is to people that have never heard of them, I would say that they are currently the best Swedish doom heavy metal and Grammy Award winning band–they put on one hell of a show and have the coolest uniformed look of all metal bands that perform in costume. Seeing them live is an experience in its own right. The band members never break character and each of the musicians knows just how to flaunt their rockstar-ness. But I digress. 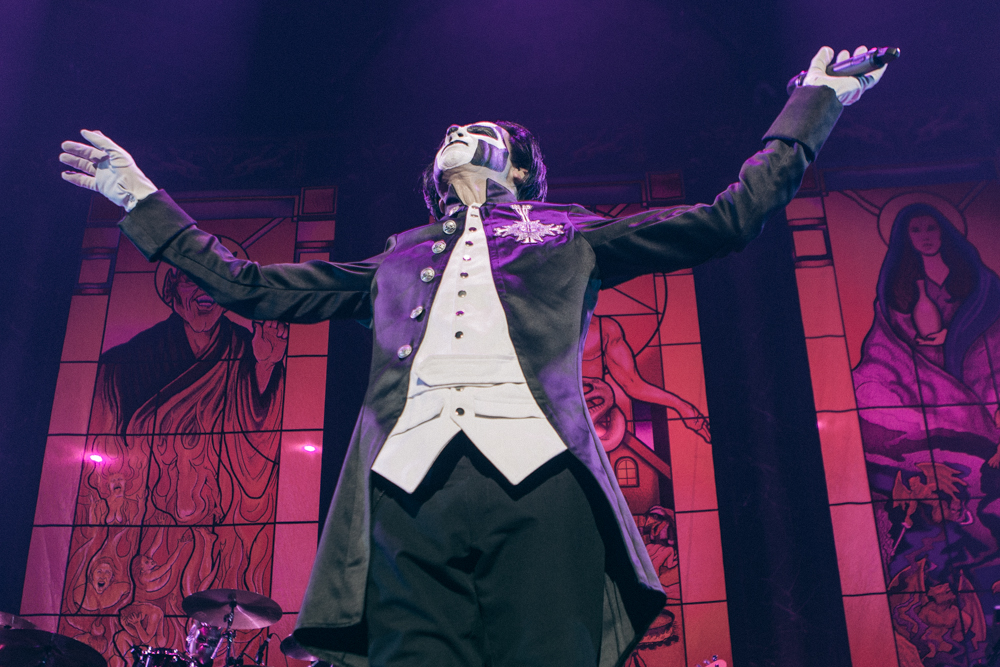 After the band finished their set and took a bow to the ecstatic but eager to see Iron Maiden crowd, they made their way off stage as I packed up my gear and the arena lights came on. I walked over to the security guard off of stage left, and asked him what the easiest way to get to the parking lot from here was–remember, I left my two nephews, my niece and my sister just chilling in the parking lot. He pointed me into a direction that led into what looked like a cavernous tunnel draped with black curtains and mumbled a bit of directional advise that I pretended to take in, but of course, I forgot to plug my ears that night so I didn’t hear fuck all what he said. 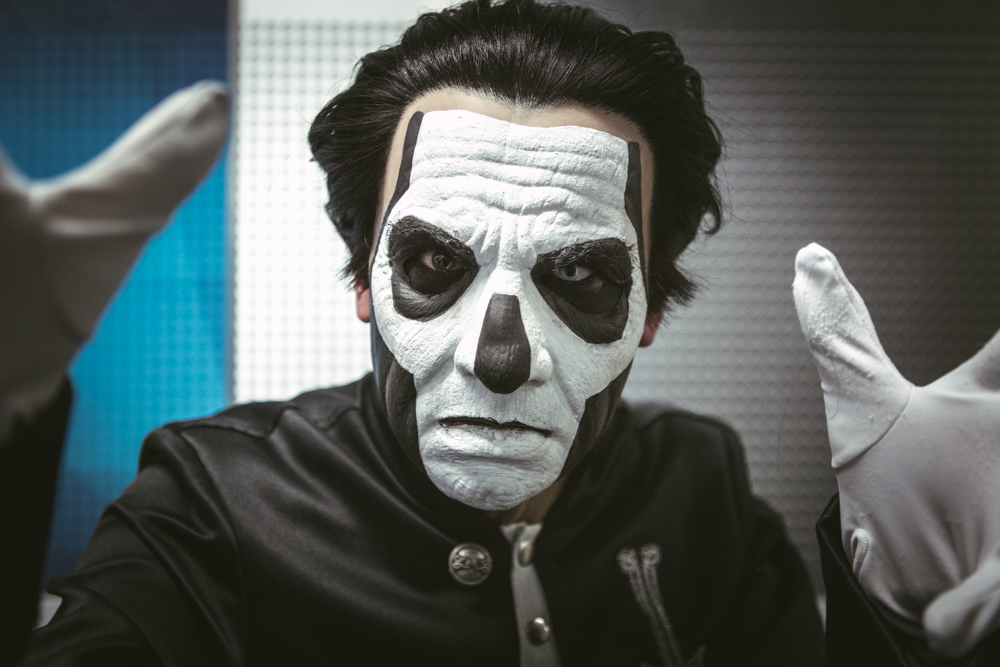 I embarked on my trek to make it to the outside world, as I had thrown the ring into the heart of Mount Doom and now I had to make it back to The Shire. Following the man’s loose advice, and after running into yet another three clueless security guards who had no idea what direction to point me to nor knew what power my photo pass credentials held, I ended up in the hallway where both Iron Maiden and Ghosts green rooms were located. Soooooo what do I do? I see nameless ghouls walking down the hallway, so I stop them and ask them for photos all the while telling them I’m a huge fan. Then I see Papa Emeritus III and repeat the process which results in an impromptu photo shoot and fan-boy experience. The cool thing is, as I’m directing him on what to do, he’s thanking me. True story: not all metal heads are dicks! After my brief encounter and fan-boy experience, I eventually make my way to some set of doors that take me back out into the daylight and trek 10 minutes through the desolate wasteland of cars to find my family still parked in the same spot with the car running.

Turns out they were fine with seeing the arena from where they were at. I guess its really easy to please a 11, 9, and 6 year old by just taking them to the exterior of a giant arena that an NBA championship team plays at. On the way back to SF, I drive the fam by AT&T park where the SF Giants play. I told the kids that they saw three professional sports team stadiums (Oakland A’s play at the Colosseum, right next to Oracle Arena) tonight and they cheered. It’s kinda easy being an uncle, for now. 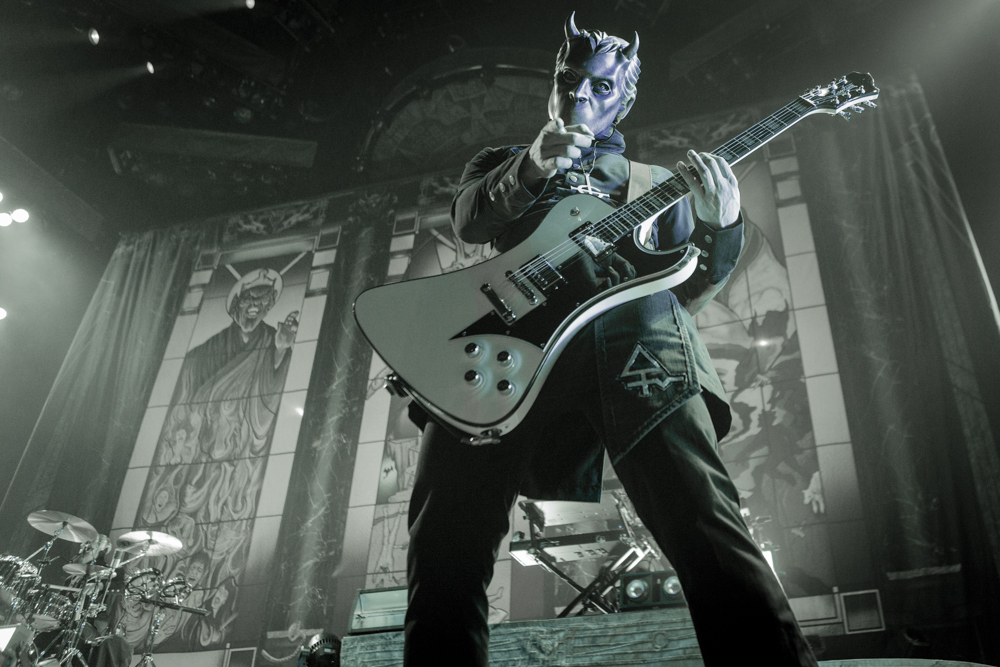