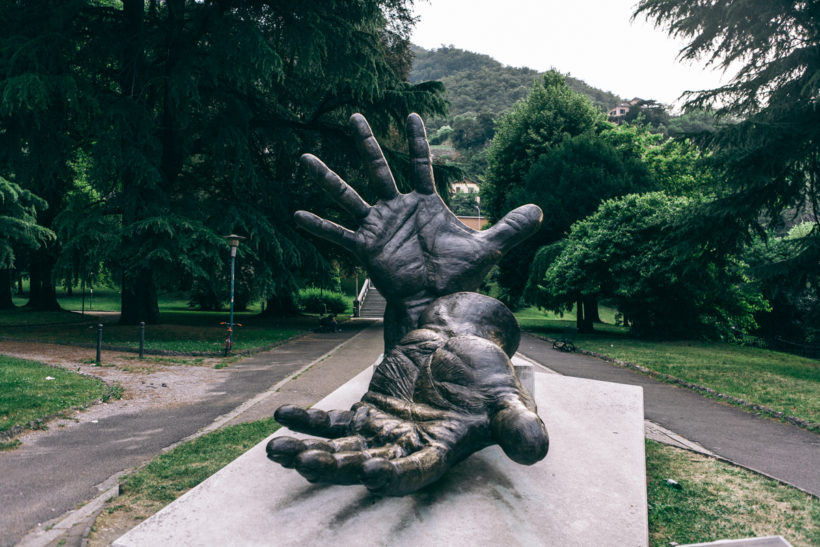 Lake Como? Dope. I highly suggest going. This is a beautiful lake that rests right along the boarder of Italy and Switzerland, and is a short 35 minute train ride from Milano. It’s a popular destination for Milanese and Genova residents to get away and relax. George Clooney recently bought some vacation property along the lake after filming Oceans12, making him a popular attraction and bringing more of a crowd hoping to get a glimpse, kind of like Bigfoot, but George Clooney. A Chicago friend, Marisa, had flown into Milan to visit Christine and I, and after showing her the whole Milan thing, we planned a short trip to the lake so that she can take it all in. We figured Monday would be a great day for us to go, avoiding the weekend tourists. A short ride later, we found ourselves lake side, snapping pictures like the tourists we wanted to avoid, and looking for a spot to stop and have lunch. We came across a very small out door back patio of a restaurant, and the menu looked wonderful for what we were looking for. We talked, had a glass of wine, Osso Bucco, gnocchi with a fresh butter and tomato sauce, and mushroom linguini. All of which were very very scrumptious and light. The Osso Bucco is a veal cut, cooked until its tender and falls off the bone, which is filled with a soft and very flavorful marrow. This cut of meat is on a plate surrounded by a safron Risotto, balancing out the two almost perfectly. The good thing about food in Italy, besides how fresh all the ingredients are, is that portion size is just right. Being American, I’ve come to the realization that we are in fact an obese country, and it has to do with a number of things. The ingredients and hormones that we allow manufactures to put into our food, the genetic altering of food, and the portion size in which we all expect to be served at a restaurant. There’s no reason for us to go to a restaurant and expect a never ending pasta bowl. Why? Stop eating until you are stuffed, and start eating enough to feel comfortable. We have forgotten about quality over quantity and pumping our bodies and our children’s bodies full of shit. Just saying. Wake up America.

After basking in the heat and wondering the streets, and about 4 espressos later, we decided to take one of the many boats out onto the lake for an hour tour of Lake Como. Reasonably priced for only 100 Euro. This is where we received a ton of useful information on the history and mansions of Lake Como, from our favorite Como native, Ignazio. Ignazio claimed to know only a little English, but did the whole tour in English, speaking way better than some of the other people I have met in Milan who actually studied English. He took us past the most prestigious hotel along the lake, showed us the mansion where the final scenes of oceans12 was shot, the home where Mussolini hid out and spent his last days before assassination, and the hidden castle of a Russian prince. It was great to get out onto the water, being such a hot day, the speed and the breeze was the cool down we all needed.

It was getting later in the day and we decided to trek up the mountain side via lift/train thing to the top of Brunate, where the streets were cobble stone, hilly and narrow, and the aromas of Italian kitchens can be smelt wafting from residential windows, inviting you to come in and eat with the family. Old women were conversing to each other from backyard to street side, and stray cats were giving you the evil eyes knowing that you weren’t from the hood.

We found a small, very small, restaurant and bar close to the lift station where we initially started our hike from, and thought it was a good place to get a light appertivo and drink in, before making our decent back down the mountain. We ordered a plate of mixed cured meats, along with a plate of Mozzarella and tomato. All very fresh and very delicious, a perfect pairing with our aperol spritz’s, all while watching the sun slowly set, over the hazy skies of the lake. We finished up, took the lift down the mountain, and headed back to the train depot to catch our train home.

On our return trip to Milan, we found ourselves sharing a car with a young Italian man, Antonio, from the region of Puglia. He had asked me if I had a cell phone that he can use, and if so if he can use it. He explained that his had died and that the train that we was on was four hours late, and that his girlfriend was going to kill him. Sounds legit enough. He shot her a text and she called back and he had a conversation with her explaining the situation. After the phone call, we conversed about what we were all doing with our lives, Christine explained that she was going to Bocconi, and how he had gone to the same school. He also informed us that he was working with a very famous eye-wear company, and working in Geneva, living in Geneva, and only getting to visit his girlfriend and his dog on weekends or nights that he had free. Because of the taxation in Italy and “the crisis”, Italians are finding jobs in the surrounding countries such as Switzerland, where the taxing is far less. He has a good set up keeping his girlfriend in Milan so that he can stay close to home, and holding a residence in Switzerland to avoid being taxed on his well paying job. He also told us that every two years, the company had the right to place him in a different international location and that he has three chances to say no. Also, no matter where he could end up for his next term with his job, weather its Qatar, Tokyo, LA or New York, his least favorite place would be to have to end up in LA. He has to go to LA for an event and he’s not looking forward to it. It’s too fake he says. He enjoys New York and would love to visit Chicago, but doesn’t like LA too much. New York, Chicago and San Francisco are the most similar to European cities and he would feel more comfortable living in one of them. Also, English is spoken in all the offices that he gets to work in and visit, no matter where, and who he talks to. He says we are very lucky to have English as our mother tongue, and we explain that we wish we were all as fluent in other languages. He gave us some tips on restaurants to go to, recommending one to go to and dropping his name for a discount, as well as some shoe brands that Marisa would be interested in shopping for. I tried to take his portrait, but the lighting was bad, and I was only traveling with a 24-70 f2.8. At the end of our trip, he thanked us for helping pass the time, thanked me for letting him use my phone, and even gave me the pair of his companies glasses he was wearing, as a thank you. Thanks Antonio!