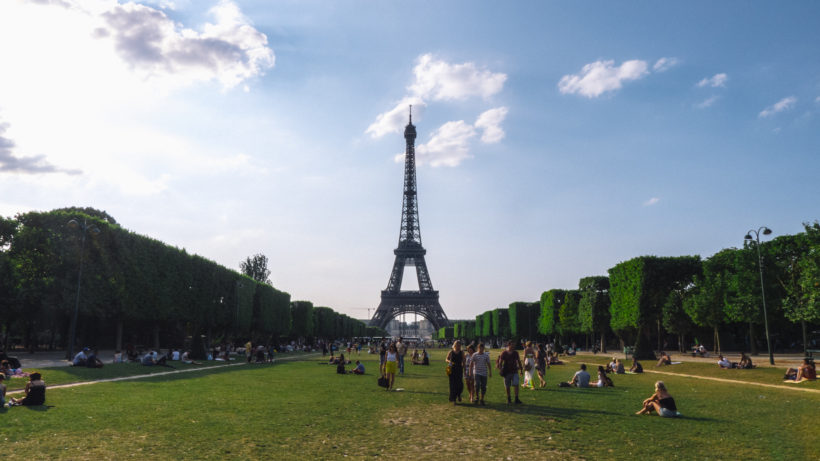 Took the late flight in, a bumpy hour and fifteen minutes, to what seemed to be the farthest airport ever with only one terminal. Upon landing, we hopped on a bus, traveling through the empty suburban highways of Paris, only to be greeted by the glowing lights of the streets of Paris after about an hour. From there, we quickly got out bearings and hopped on the metro to take it 5 stops down to the stop that was closest to the hotel that we were staying at. By this time, we were starved, and having our last meal at lunch, and only a light snack at the airport in Milano to hold us over through dinner, we immediately checked in, dropped off our stuff, and hit the streets to find some food. This is at about 1am, Saturday at this point.

We got a recommendation from our concierge that most place would be closed at this time, but he knows of one joint where we can grab a bite right around the corner. We hesitantly followed his directions, and came across the Grand Cafe and asked if the kitchen was open, with a quick response of “yes”, but not for outdoor seating, they were closing that down, but we were more than welcome to come in and have dinner. We sat down, ordered a bottle of wine, and scanned the menu for something, anything that sounded appealing, and what it came down to, was Christine and I ordering the same dish, a nice portion of Beef Tar Tar. Upon ordering, the waiter said in his friendly/concerned French accent, “you do know that it is raw?” and we knotted yes, and he walked away with no questions asked. Christine and I were quite curious as to why he would ask that, wondering if he usually has tourists come in and order it, not knowing that it is raw beef, or if he knows something that we don’t know about the digestive process and how consuming a pile of raw meat at 1am probably isn’t the best idea, but we said whatever, and started to drink our wine, discussing what our next move was.

The waiter brought out our dishes about ten minutes later, a large pile of raw beef, clumped together with a raw egg and seasoned with mustard, accompanied by a light salad. We’ve had beef tar tar before, in other cities and countries, and this was… different. For one thing, there was a lot. Enough to be concerned about my safety. The pieces of beef in the tar tar slightly larger than what we have been accustomed to as well. I was alarmed at first as to weather Christine and I can finish our dishes, but after a few bites accompanied by some bread, we soon found our plates empty. Probably from being famished and traveling for 8 hours straight.

We headed out the street to check things out a bit an to get a lay of the land. What we found was a shit ton of irish bars with mad french people and tourists piled out into the her gardens and smoking sections. We actually thought about going into one, because christine was convinced that any bar with girls dancing foolishly drunk on a stage was good. We decided to call it quits and get a good start the next day.

We woke up the following day, somewhere around 10:30 and we were out the door by eleven with the intention to get as much touristy stuff out of the way. We stopped a a sidewalk crepery and both ordered the Nutella and banana crepes with cappucchino. We jumped a bus in the general direction of Notre Dame, and the catacombs. Went to the Notre Dame, it was old and the line wrapped around into about a 2 hour wait, so we just checked out the exterior and walked over to the catacombs, and again, the line was wrapped around the block, and was an expected 4 hour wait.
This was not how i wanted to spend time in Paris.

We hightailed it to a small corner bistro. I ordered a few beers, Christine ordered a few glasses of wine, and we sat there and people watched for about 3 hours. Once we were certain that we overstayed our welcome at this bistro, we walked into the general direction of the Eiffel Tower. Along the way we stopped and picked ups few pastries and a bottle of wine. We kept on our way to the tower, and stumbled upon a really old church, or something… none-the-less, it was beautiful. Grabbed a few photos, ran around the lawn. Got back on route, stopped at a grocery store, which was beyond packed, picked up a few beers, some hummus and crackers, and figured we’d do a really like dinner sitting on the lawn underneath the Eiffel Tower.

So we sat and consumed under the Eiffel Tower until the sun set. It was beautiful. We started to walk back in the direction of the hotel, debating on if we would try and find some night life in the neighborhood which has the canals, stopped at a weird little river festival where we grabbed a hot dog and some Brooklyn Beers, and then contented our walk. Christine had explained to me our location and we would be back at the hotel in a 20 minute walk. Boy, was she wrong. It took us like an hour and a half walk. All hopes of us going out that night were gone. We were soar and tired from walking the whole day, so we crashed out.

The next day we got up early and headed to Montmartre. Here you will find a giant old cathedral with with a view of the whole city, a square where all the artists come to sell their work and do live portrait paintings, and a handful of touristy cafes and restaurants. The streets are lined with some amazing street art and graffiti. We stopped at a less crowded cafe outside of the square to have breakfast. The food was yummy, and we had this super goofy waiter who spoke very little english, but humored us with weird little voices and noises… Not on purpose, I think that is just how he was. He reminded us of a French cartoon character. We wondered throughout that neighborhood for a few hours before taking the metro to the other side of the city and visiting the cemetery where Jim Morrison and Oscar Wilde, along with many other famous French people, were buried, Père Lachaise Cemetery. This is a huge Cemetery where it is easy to get lost, and you are provided with a map of the stars. We skipped grabbing a map and decided to just wonder. That is also a bad idea, because you can find yourself wondering for hours. After about an hour of just wandering, we went back for the map. Found Jim Morrison’s grave, which is highly overrated and blocked off by barricades. You can’t even get within 15 feet of it, nor get a decent picture, and then Oscar Wilde’s tomb/monument where it used to be littered with thousands of lipstick kisses from all of his die-hard fans. They cleaned the monument, and surrounded it with plexiglass so that it would not be defaced, and had signs about defacing the property. We still got to witness a girl give the plexiglass a smack with her lips, while at the same time, i think, ruining her mothers photo of her doing it by being in the background taking a picture.

We left the cemetery, and headed to Canal Saint Martin neighborhood to take in one more area before we had to hightail it back to the airport. This neighborhood, from what it seems, is the cool, trendy, hip neighborhood to go to. If and when we go back, I’d want to find a place to stay there. Cool bistros, cafes, shops and even a mexican restaurant that actually looked like legit mexican food. We basically ran back to the station to catch a train to the hotel, grab our bags, then hop on another train to the bus, to take it to the airport. Famished and dehydrated, we boarded our plane to make our way back to Milan.